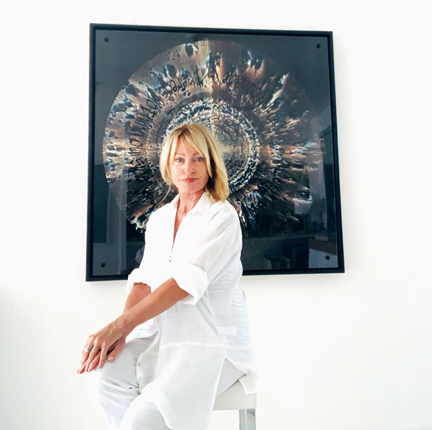 Christine Matth&aumli was born in Germany. She lives and works between the Hamptons, New York, Miami and the Bahamas.

During her extended travels to different places and countries she captured her surroundings, which resulted in different photographic series. Her favored subject on her journeys has always been the water.

Her work has been exhibited and collected internationally.

"The symbol of water represents our subconscious, that which lies beneath the surface, our limitless divine nature. Our subconscious sea is where creativity exists and from where, through the seed of thought, ideas manifest in the physical realm."

On my search for inner transformation and self realization, I explored ancient symbols, historical imprints such as labyrinths, sacred architecture, symbolic geometric shapes and proportions. That led to different series such as LIGHT and SEA, CIRCULAR SKY AND SEA, SACRED PATH and ARCHITECTURE of SOUND where each series is a continuation of the previous one.

LIGHT and SEA images are abstract visual meditations derived from the interplay of air, light and water and the shifting of colors from form to formlessness.

SACRED PATH works are visual meditations with spiritual dimensions using the Labyrinth as a tool.

ARCHITECTURE of SOUND works are visual expressions of the correlation between spiritually significant sounds and colors and their healing powers.

CIRCULAR SKY and SEA images derived from my Mandala series where the geometric form of the circle represents wholeness, infinity, perfection with no beginning and no end.

SAND and GOLD MANDALA series are inspired by the Buddhist monk sand mandalas leaning on the idea of creation and destruction with the exception that the dismanteling will happen with the passage of time, the transformation of everything from form to formelessness.